Myron Cope passed away yesterday at the age of 79. Cope, perhaps the most well-known personality in Pittsburgh, had been broadcasting Steeler games since the early 70’s, all the way through until 2005, when health concerns forced him into retirement.

There isn’t a whole lot more for me to say beyond those three articles, as they pretty much cover everything. Myron Cope is perhaps the most prolific figure in Pittsburgh sports history, easily surpassing Bradshaw, Swann, Stargell, Jagr, or even maybe Lemiuex. I think it’s very fair to say that the only comparable figure is that of Roberto Clemente, and that is really saying something about Myron.

Steeler games won’t be the same without you Myron. Rest in peace, and mm-hah, don’t worry about us. We’ll be sure your towels are waived with pride every time we take down the Bungals, Birdies, and especially the Brahnies.

Saturday’s Steeler meltdown has this Yinzer a little down on his luck. What better remedy for a broken heart than Pirates baseball chatter?

…oh man, if you could only feel the sarcasm of that intro ‘graph…

John Sickles, often considered the source for MLB prospect info, has posted his annual list of the top Pirates prospects. Pretty thin, if you ask me. Time to unload and re-build?

Apparently not if your Neal Huntington. Take a look at the offers he’s supposedly getting from Seattle for Ian Snell and Jason Bay. Somebody tell Neal to pull the trigger already.

The link above reports that Huntington passed on a Snell for Adam Jones, Brandon Morrow, and George Sherrill deal earlier this off-season.

By throwing Bay into the deal, it’s more than likely that the Bucs could entice the M’s add Carlos Triunfel to the deal, if not more. My suggestion is to try substituting either Ryan Feierabend or Tony Butler for Morrow. That adds up to:

Jones (B+ to A- prospect, depending on who you ask)
Feierabend/Butler (both B to B+, with Butler probably being the better prospect)

Triunfel (B+ to A-)
Sherrill (poor man’s Damaso Marte)

Considering Bay will already be years into the decline of his career by this point, and Snell will have maxed out as a number 3 starting pitcher, I’d consider that a successful deal if made.

(This is the see below part)

Triunfel is the guy that screams to me as a must have in these discussions. The kid is a stud, and is already ascending through the minors at age 18. He’s drawing some comparisons to both Alex Rodriguez and Hanley Ramirez, mostly because of his early success, and while asking him to live up to either of those two might be a stretch, expectations for Triunfel aren’t far off.

The Pirates are looking for Jack Wilson’s replacement, and let’s face it, Brian Bixler is not the answer. The smart move: get rid of Wilson to give Bixler some time at shortstop. When the experiment is deemed a defensive failure about halfway through 2009, slide Bixler over to second, where scouts say he could actually be a solid everyday player, and plug in Triunfel.

Geeze this GM stuff is easy, somebody get me on the phone with Bob Nutting, I’m ready to take Neal’s job. 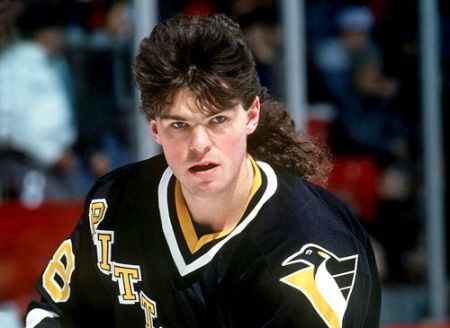 Jaromir Jagr and his infamous mullet, once fan favorites in the ‘Burgh, are public enemy #1 after unsuccessful contract negotiations led to his exile in 2001

Stick with me on this one…

Alright so I was watching my Steelers wallow through the swamp that is Heinz Field against the Cincinnati Bungals – yes the Bungals (Myron Cope where are you in my life) when suddenly, I was inspired by the infamous babblings of NBC broadcaster John Madden.

(Bear with me, this isn’t a cheap set-up for a Brett Favre joke, I swear)

So good ole John was talking about Steelers’ offensive lineman Alan Faneca, who is set to become a free agent at the end of the year and has already stated that he will not be coming back to the Steelers, who simply can’t find room for him in the payroll.

Faneca, a perennial all-pro, is a Steeltown favorite who has played with the team since being drafted in 1999. In training camp this August, some dumb reporter asked Faneca about maybe giving the Steelers a hometown discount on his contract.

Faneca almost let loose in his pants, he was laughing so hard.

But this hometown discount stuff is a very, very intriguing idea to us small-market baseball fans. What if players had some financial incentive to stick around with the franchises that brought them up? What if fan favorites like Miguel Cabrera, Torii Hunter and Jason Bay weren’t un-signable by small-market teams who struck it big when they raised these guys in their own systems?

So here is my inspired idea:

Create a system that gives small-market franchises a little financial help in holding onto guys once they become free-agency eligible.

You know that luxury tax set in place to end the Yankee dynasty? Yes, the one George Steinbrenner and sons are capable of completely disregarding. Why not use it to help pay for new, long-term contracts of players who have been with one team their entire career and have earned a big-time contract.

Say you set a cap of $100 million – five major league teams had payrolls over the $100 million mark, with only the Yanks and Sox over by significant amounts – and you tax these teams a certain amount (I’m ashamed to admit that I don’t know the exact percentage teams are taxed, if somebody would be so kind as to help me out there). Either way, I would probably up the tax enough to make the Steinbrenner’s and Henry’s of the world sweat a little bit.

You offer this tax to teams, with the mandate that they have to put the money towards locking up homegrown favorites to long-term deals, weighting the system to help small-market teams such as the Marlins, Pirates, and (the no longer Devil-ish) Rays first.

So say for some unforeseen reason the Pirates decide not to trade Jason Bay at some point in the next year, and leave themselves the option of resigning him long-term after next season. (I realize this probably won’t happen, and actually would probably be a bad idea for the Bucco’s, but I’m just creating an example here).

For arguments sake, lets put Bay’s projected market value at $10 million per year (I don’t know what it really would be at this point, I’m just using a nice, round number since I am but a simple journalism student). If this tax can generate just $3 or $4 million for the lowly Buccos, bringing the Pirates contribution to Bay’s salary down to $6 or $7 million a year, they just might have a shot at resigning him, whereas a $10 million per year salary is just too much for the Pirates modest payroll.

Maybe I’m just an overzealous, small market fan, but wouldn’t it be better for the game to have more Cal Ripken Jr.’s, Tony Gwynn’s and Craig Biggio’s to help put fans in the seats.

The goal of every professional franchise is to keep the interest of the casual fan. Casual fans want two things: a winning franchise (obviously), and a franchise face. One of the easiest ways to do put a face on your franchise is to keep around the guys who have grown through the system, and who have taken their bumps and bruises right in front of the hometown fans. When those guys succeed, it does wonders for a team’s fan base, because the fans begin to identify with the player.

Personal example: Jaromir Jagr was a fan favorite for the Penguins in the 1990’s, and following the retirement of Mario Lemieux, Jagr became the face (and the hair) of the Penguins franchise. He was the team captain and was arguably the best offensive player in the NHL. Following bitter, unsuccessful contract disputes with Penguins personnel, Jagr was traded to the Washington Capitals, and has been a villain in Pittsburgh ever since, getting booed every time he touches the puck at the Igloo.

It is completely undeniable that fans feel a stronger bond with players who stick around for their entire careers. Think fans want to see their hometown favorites disappear? Ask Red Sox fans how they felt about fan-favorite Johnny Damon’s departure to the Evil Empire a couple years back.

So maybe my little system is a slightly extreme/improbable, and maybe there is no way to generate the funding to help implement it, but I think it’s a decent idea. If nothing else, it was a creative way for me to vent my hatred of the Steinbrenner family.

*By the way, I defy Al Michaels to come up with 900+ words based on anything that John Madden says.