Under the Microscope: Neal Huntington 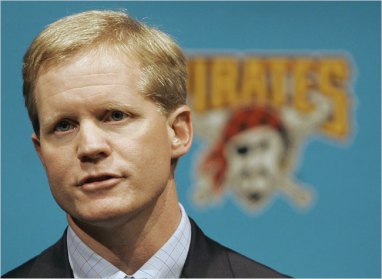 We’re almost three months into the Neal Huntington’s reign as Pirates General Manager, and despite some complaints about a lack of off-season activity, Huntington has been a busy man, and I think now would be a good time to stop and reflect on some of the team’s front offices moves since his hiring.

The first order of business for Huntington was the hiring of a new manager and coaching staff. While it is too early to really judge new skipper John Russell and his staff, we did find out a couple of things about Huntington’s philosophy.

Russell, who comes to Pittsburgh with 10 years of managerial experience under his belt, has been known to work wonders with young ballplayers, and is rumored to be a good motivator as well. While with Philadelphia’s triple-A club, Russell worked with former-MVP Ryan Howard and perennial all-star Chase Utley as they made their ascents to the big club.

Thus, we can assume that Huntington’s M.O. is to built towards the future with young, cheap ballplayers. Not a very uncommon approach in baseball these days among small-market clubs, and one that the Pirate faithful are more than familiar with by this point.

Huntington has made only a few moves with players on his roster, and only a couple of them should really come as a surprise to Bucco fans:

I have no complaints about any of the items mentioned above. Some of the moves below, however, are a little more questionable.

There have been a lot of grumblings about Huntington early on, but honestly, its too early to judge his worth as a GM at this point. It will be interesting to see in what direction he decides to take this team.

There’s potential here for some big deals that could make or break Huntington very early on in his GM career, and its an Anthony Smith-guarantee that Bucco fans will be watching him closely.

The Pirates have agreed to trade relief pitcher Salomon Torres to the Milwaukee Brewers for a couple of minor league prospects. Torres, the team’s longest tenured player, had been a mainstay in the Pirate bullpen since 2002.

Torres is a perfect fit for Milwaukee, where he will probably get a spot setting up games for new closer Derrick Turnbow. Since losing closer Francisco Cordero and set-up man Scott Linebrink to free-agency, the Brewers have been scrambling to find bullpen depth, and with Torres, it looks like they’ve plugged up one of those holes.

Torres’s disappointing ’07 campaign was a fluke. He spent the entire season very unhappy with management (a.k.a. ex-GM Dave Littlefield). Littlefield somehow “tricked” Torres into signing and undervalued contract, promising to help fund a baseball facility in the Dominican Republic. I don’t know exactly what happened, but for whatever reason Torres was not happy.

Torres’s ’07 is no indication of what Torres can still do. Injuries, alongside his growing feud with the front office, really hindered his performance last season. So long as the injury doesn’t linger, expect Torres to return to his ’06 form, when he was baseball’s most used reliever.

This is a deal the Pirates needed to make at some point, and as far as I’m concerned they did a pretty good job. They pick up a couple of guys who might be dependable bullpen guys in a couple years, and they managed to dump Torres’s 3.5 million dollar salary. Expect to see a few more moves in the coming months designed to simply cut back payroll as GM Neil Huntington keeps trying to clear out some of the garbage that Littlefield has left behind for him. 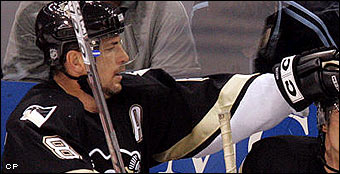 And now to the sentimental portion of today’s post. The Pen’s tried to waive my all-time favorite Penguin (sorry Alexi Kovalev) Mark Recchi to the minors this week, but the Atlanta Thrashers stepped in and claimed the future Hall of Famer.

Recchi, a part of the 1991 Stanley Cup champion Penguins’ squad, was traded near the end of the 1992 season to Phucking Filly. Two year old Jake balled his eyes out when mommy tried to explain to him why the team traded.

Anyways, its a sad day for Penguin hockey, although the Pens did make the right move in cutting him loose. Also, I was happy to see GM Ray Shero and company gave Recchi all the respect he deserved.

Doesn’t change the fact that I’m going to dearly miss the Recching Ball. I’ll be crying in my dorm for the next few days if anybody needs to find me.